Showing posts from 2011
Show all

December 01, 2011
Call  *321*671# to activate the service on your phone. It will ask you for permission if you want to enable it. To customize the account dial 52555 To disable voicemail dial *321*673# You can also activate it by sending out a SMS Send START VMS to 54321 for activation  Send STOP VMS to 54321 for de-activation  This post if for my own reference. If you have any questions leave a comment and if I know about it I will try and answer it.
33 comments
Read more

Which mobile OS will win the battle?

October 24, 2011
tl;dr If I had to predict today which OS will finally win the battle it has to be Android. Once the market stabilizes there are only so many OS's that can survive. Android is to the mobile what Windows is to the PC. It might not be the best to begin with but given enough time it can finally catch up to the competition. There are only that many new features that you can add. Once you've added those there will hardly be any differentiating feature amongst the competing OS's. In the end it will be about hardware. And as of now only Android is the only OS which can run from a very low end smartphone to the top of the line phone.
Post a Comment
Read more

September 12, 2011
Finally node.js is available as a windows binary without requiring Cygwin to be installed. As of writing this post you can download the node.js binary 0.5.6 . Currently npm does not work with node.js on windows. You need to download and use ryppi.py instead of npm . It works similar to npm but requires python. To setup node.js first set the PATH and NODE_PATH to the where you have copied node.exe.              set PATH=%PATH%;c:\node              set NODE_PATH=c:\node It is better to set these environment variables in the System Properties so that you don't have to set these variables every time. Follow the following steps to do that. Right-click  Computer , and then click  Properties . Click the Advanced system settings in the left side bar. Click the  Advanced  tab. Click  Environment variables . Append the node path to the PATH variable Create a new variable NODE_PATH and set it to the path where node is installed Once you are done with it need to insta
1 comment
Read more

TIL: In JavaScript function.length returns the number of arguments it supports

May 06, 2011
function test(a, b, c) { } alert(test.length); In this piece of code if you use .length on a function it returns the number of named arguments that this function accepts.
Post a Comment
Read more

April 07, 2011
I normally know about conditional compilation of JS in IE using <!--[if gt IE 6] --> but here is something new I figured out today. var IE; //@cc_on IE = parseFloat(navigator.appVersion); The best part here is that the JS code stays in your JS files and does not uglify the HTML if you ever have to use conditional compilation. Here is some more information about it from MSDN article Conditional Compilation (Windows Scripting - JScript) .
Post a Comment
Read more

Speed up your JavaScript

This post is just for my own reference. Here are the slides and the video of the presentation by Nicholas Zakas. Goes into great detail in ways to improve the speed of your javascript code. Speed Up Your JavaScript View more presentations from Nicholas Zakas The article summarizes most of the points in the slides and video http://james.padolsey.com/javascript/zakas-javascript-performance-tips/
Post a Comment
Read more

March 15, 2011
If I have a new system the only things I install are a browser, IM clients and some development environment. But the thing that has really changed now is that I can do the same thing on Linux without thinking too much. I can install Chrome/Firefox, the IM's are pre-installed and most of the development environments are available on Linux. You could do that earlier as well but now the main thing that has changed is that there are new tools that are only available on Linux or Mac. The main softwares coming to mind are GIT and node.js . They are available on Windows but often seem crippled. If you really want to use them you will move to Linux or Mac. That is where things have really shifted. There are half a dozen twitter clients for Mac and quite a few for Linux but have a look around the only twitter clients you will find on Windows are Adobe Air based clients. No one seems to be writing native or .net based clients. To be fair there are some obscure .net based clients which no
Post a Comment
Read more

New theme for the blog 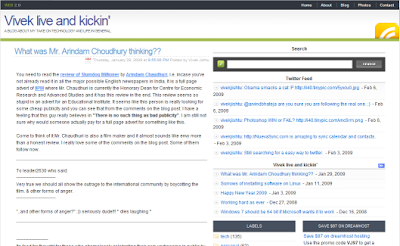 The previous theme was supposed to be there for a few months but it ended up being there for years. In this new theme I got rid of all the junk that had ended up in the sidebars. There are no advertisements as those were just distractions and since its a personal blog there was no real need to put them in. Also removed the twitter, soup and the other blog feeds. They were adding too much distractions to the content. Have got rid of search, rss feeds and a dozen other distractions that were coming in the way of the main content. This new theme is supposed to be a little better as it puts focus on the content. And hopefully with twitter going towards the dark side I just might end up blogging again. There are so many topics that are in the drafts mode. Whenever I get sometime to polish them a little I will do that. Overtime this blog has turned from being about technology to being about me. All the unpublished posts are about technology so lets see when they finally go public. Had pla
Post a Comment
Read more

Finally cleared up the mess created up by hackers

February 27, 2011
Some of my websites hosted on dreamhost were compromised and iframe pointing to a url http://alcobro.net/t.php was added to all the index.html and index.php files. Had to wack my brains a bit to find the solution though. Finally saw the solution on the dreamhost wiki article Recovering from an iframe injection hack . The solution was relatively easy but the difficult part was figuring out how they got in. Also the mess of changing all the passwords is not something I really enjoy. If nothing else this exercise made me realize that I need to create separate user and profile for each domain. Though it will be a little messy but still better than having all the domains hacked in one go. Wasted a whole day in cleaning the mess and creating backups and removing things that I did not need on the server.
Post a Comment
Read more

Birthday blues and the year gone by..

February 22, 2011
Another year just went by and I never even realized it. This year was exciting and quite a bit happened. Moved to a new company and city. With each passing year I did have my share of birthday blues but this time I feel a lot more calmer. The title is there just to make it sound a little melodramatic and also keeping with the tradition of the birthday blogpost titles . In that sense this year I feel a lot more stable. I know where I am heading, though not sure when I will get there, but there is a plan . This year saw a lot of ups and downs in terms of where I was heading. Finally moved to Bangalore which is the last thing I would have ever imagined. So far not really regretting the decision. In terms of blogging and tweeting did nothing amazing. None of my blogpost were on reddit, digg or slashdot ( Since I did not write anything ). I made nothing amazing in terms of s/w or released anything that would be noteworthy. Actually there was one thing that I did release pics.fefoo.com .
Post a Comment
Read more
More posts