November 04, 2007
After trashing the open social platform last night I thought of developing a hello world application for the platform. Here are a few screenshots of the sample applications that I built tonight. 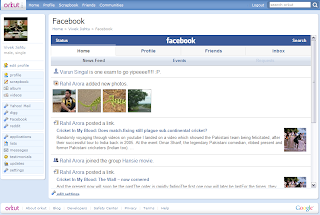 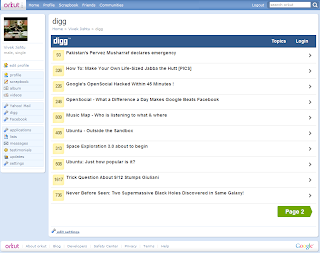 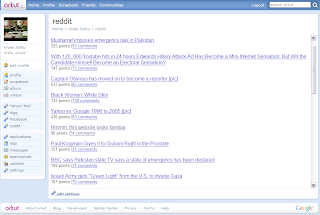 They are nothing more than simple iframes but it defiantly seems cool the first time you see it.

Martin Selva said…
This comment has been removed by the author.
11:10 PM

Just checked ur open social apps. They open up pages of other sites in iframes on the orkut page. But that should not be the nature of an application. right ????

What I understand is that...

1> content owners should create apps (eg: a Digg app has to be built by digg)

3> the apps should bring the social factor to the light (i.e it could fetch your Orkut friends (using open social APIs) and show the current activity of the friends on the network of the app in question)

M@D said…
It's cool to write social applications, but how do you write an application on this API for other services such posted by author? PayPall presented his App few weeks ago, but i don't think that it is written on API, it is maybe made like mini version of service with application-similar design hosted near "big one", and used.

If you know another way, write please, because i have an order to write application for one site, and don't know another method.

P.S. In google docs I don't find anything else about functionality such "get friends list", "Actions" ect.
2:16 PM