The ASUS Eee PC is going on sale in Chroma stores. Not sure when it will be launched in north India but finally they are launching it. I just got a mail today and as of now there is no mention of whats the magical figure they are expecting for the sub-laptop. The price point according to the so called speculation (the stock market is really having its effect on me) would be 13K-16K. In terms of looks the EEE PC looks a lot better than its rivals. Thought not the best looking thing but its still a lot better than its rivals. 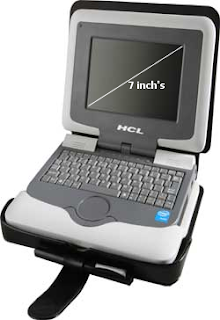 If by some chance they set the price at 13K it will be a fitting reply to the HCL MiLeap X series laptop. The HCL MiLeap in my opinion looks fugly but then its my own personal opinion. It has a screen which is 7" but if you look at the extra border it will be almost as big as a 12-13" laptop which makes it a little impractical. Had apple designed such a product it would be 8" at max but thats another thing that it would cost at least 7-8 times more than this.

Lets see if the EEE PC actually makes an impact in India. The EEE PC makes sense as a second laptop, but it might just be hit with the first time users as well.

Now I need to find a contact in Mumbai who can courier this thing to me. But ASUS is also going to launch the 8" version of the EEE PC soon but I doubt it will be the one being launched in India. As of now there are no updates on the EEE PC India website. I am still not sure if I should wait for the launch on 8" version or just buy the 7" version.
eee hcl mileap tech