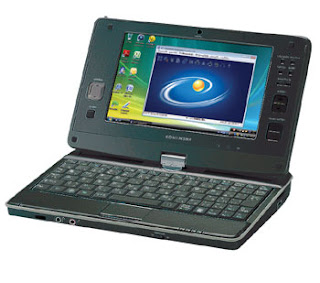 I was searching for a picture of the MiLeap and I came across this blog post where I saw these pictures. They really have the target audience as kids for the 14K laptops. I was hoping that it would look something like the palm folio. But if this is what it really looks like I would have second thoughts about buying it. I was so looking forward to buy a sub laptop.

The 29K laptop at least looks decent but given the price I would buy a full laptop rather than think of buying a sub laptop which seems underpowered. Now all I do is to wait for the launch of the EEE PC. Or the other better option is to just hope for a miracle that the final 14K product does not look like this picture.

UPDATE: While surfing I found a few pics of the Kohjinsha SH610 which looks really similar to the image on the blog. So there is still hope that the 14K model looks a little better than the one I saw on the blog.

VJ said…
My next post was going to be about if Mac made the MiLeap how would it be different. I know it would have the mac tax but other than that how would it look.
1:13 PM

Anonymous said…
Vivek, as you rightly pointed out, the fully functional HCL laptop is actually close to Rs 30, while the 'low-cost laptop' at Rs 14k is really basic with flash memory (not sure if its over 4GB). Moreover, the Indian market has had a history of sticking with MS Windows OS, so it will be interesting to see the response to this user friendly Linux - is it also Xandros like in Asus EEE PC?
But one thing is sure, there will be newer low cost laptops with better functionality than this one. Its just a matter of 6-12 months.
In all - that's great news for the Indian consumer!
12:52 AM

Anonymous said…
I am very new to the word flash memory. Am confused whether the mileap x (priced 14k) series will have a hard disk or not? If it will,Any guess's as to what would be the hard disk space?
11:35 PM

VJ said…
I don't think it will have a hard disk. It will probably have a flash drive something like the OLPC. But I've not got the specs so far so its pure speculation on my part.
11:58 PM

Anonymous said…
HI all,
I bought the x series last week in New Delhi. I paid 16,500 as I had opted for one with a 30 GB hard-drive. The build quality is excellent for the price. And Ubuntu linux (which I used for the first time) is awesome, it reminds me a little bit of both windows xp and Mac OSX.
I admit it is a bit slow, but it's more than sufficient for basic internet, mail, multimedia and office work (it comes preinstalled with a lot of equivalent applications). The only thing I am worried about is support as I live in Auckland, but support in India shouldn't be a problem. Cheers.